You are here: Products A Beautiful Mess by Brenda Manson 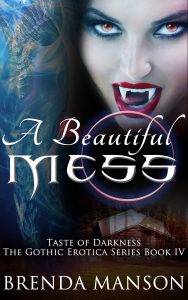 A Beautiful Mess by Brenda Manson

FOOTSTEPS IN THE DARK and A LOVE STRONGER THAN DEATH

Nora has finally surrendered to the darkness and embraced her deadly side. Becoming creatures of the blackest night, she and Kiernan enjoy their life of pillaging, carnage and endless love-making; but just when they feel they are living out their destiny, and their love is Invincible—Nora becomes haunted by the whispers of a long forgotten past …

Nora begins having dreams, nightmares really, that haunt her. Nightmares that threaten to restore her humanity…to being the weak and needy creature she once was! With the help of an unlikely ally, Kiernan and Nora set off to learn more about the tapestry of the demon world…

Facing road blocks, danger and even bone-chilling fear… what they uncover may lead them to reconsider their reckless lifestyle!

Chapter One
Rebels without a Cause
Together there was nothing that Nora and Kiernan could not accomplish. They enjoyed their new lifestyle and the havoc they were able to wreak with humans and supernatural creatures alike. Being a demon was new to both of them, so they were testing their limits, and they couldn’t imagine anyone being more powerful than them.
Nora and Kiernan knew nothing of demon politics, and it wasn’t something that crossed either of their minds. They simply went about enjoying passionate sex and scrumptious, albeit messy, meals and this was how they generally spent their days. Many of their demonic predecessors had survived by learning to control their appetites, to stay under the radar; a practice which Nora and Kiernan had not yet mastered, or even attempted.
It was as little as one month after Kiernan’s transformation when Nora possessed her first human. She found that with enough concentration, she could make herself invisible, at which point she could slip inside a human body and work the mind and body like a puppet. Whenever she did this, she could hear the host protesting, like a whispering echo in the back of her mind, but it was never enough to hinder her control in any way. Hearing them struggle made the experience all the more rewarding for her. Nora learned that under possession she could convince a person to turn over everything they owned to herself and Kiernan, including money. When Nora or Kiernan no longer found a subject useful, the person became food.
One downfall to possession was that is severely drained a demon’s power and energy, therefore in order to regenerate, a demon would need to devour twice as much food. Unfortunately, the more live, fresh humans Nora and Kiernan made disappear, the more attention was drawn to the growing number of missing people. As time goes on, they become lazy and they stopped cleaning up after themselves, leaving a literal trail of blood and carnage everywhere they go.
One day, Kiernan approached Nora in an eager desperation, his eyes filled with such hunger, the volume of which only Nora could fill. He bent Nora over the back of the couch and knelt down to rip a hole in her pants with his teeth. He thrust two fingers inside the tepid, soft crevice between her thighs. He moved his fingers in circles while Nora clenched the fabric of the couch with white knuckles. Kiernan removed his fingers and licked them off before tightly grasping her hips and entering her, pounding with an immense force that caused Nora to cry out. He didn’t cease until he came inside of her, spraying a warm, sticky liquid throughout her inner pelvis.
Nora collapsed, leaning forward on the couch. Kiernan tackled her over the side of the couch. Nora opened her legs to him and he entered her again, this time lying on top of her. Kiernan deeply kissed Nora’s neck and collarbone before biting deeply, just a moment before he climaxed a second time. He drank deeply of her blood while he ejaculated, each of the two becoming part of one another in the process.
Immediately following the consummation, there was a knock at the door. Kiernan sniffed the air and froze in place. Nora quickly dressed, throwing her now crotch-less pants on the kitchen table before answering the door. Neither of the two had expected company, but then again, their lifestyle didn’t really encourage activities such as game nights. Kiernan’s reaction had not been lost on Nora.
She opened the door with a morbid curiosity as to who could have surprised Kiernan in that way.