You are here: Products 9 Lovers for Emily Spankhammer by Kaleesha Williams 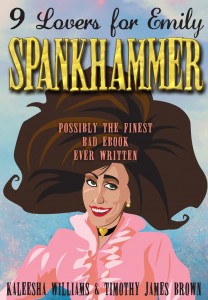 When winsome young Emily’s beau is taken from her by an infected beaver bite, she is left both devastated and heavy with child. Driven by revenge, the fantastically attractive southern belle takes the insurance money and opens a ranch. But are a best-selling range of beaver merchandise and combat with her rebellious daughter enough to distract her from the yawning chasm in her achey breaky heart? Or can Emily, with the questionable help of her spirit guide, Sparkle the mostly-invisible pink unicorn, learn to follow her heart and find true love?

But with Sparkle intent on working his way through his own depraved bucket list and the cruel hand of fate tight upon the windpipe of her dreams, destiny seems to have other ideas.

Romance, absurdity, and close calls with death, the law and personal hygiene – join Emily Spankhammer on her unforgettable quest for the true meaning of love.

Timothy James Brown has sadly worked in publishing most of his adult life. He dabbled in comedy between personal disasters before finally being allowed into print with The Brief History of Underpants in 2008, the worst year to launch an exciting new venture since 1939. Other works include The Unhappy Medium, a gothic farce. Tim lives and works in South East England, (not as easy as it sounds).