You are here: Products 50 Shades of Crazy by E. B. Archer 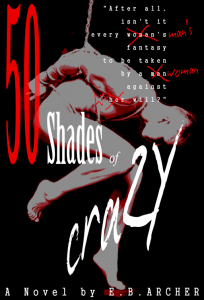 Patient to Therapist: “Until Fifty Shades of Grey it never occurred to me that it was every woman’s fantasy to be taken by a man against her will, let alone that over one hundred million women could become infatuated by the notion. After all, it’s not what I was brought up to believe. It seems somewhat disappointing—and disconcerting—to me that a piece of pop-culture fluff should contradict what we women have fought for and achieved over these past one hundred years. Don’t get me wrong, I am neither a lesbian, a feminist, a fanatic nor a prude, I simply wonder at how eager our male dominated society would be to accept the notion of a man being taken by a woman against his will. And while I’m all for a bit of fantasy, we seem to have moved the yardstick: since when did rape become synonymous with ravishment?

So Christian Grey is dead and to him I say good riddance.”

When the man who made it acceptable for a woman to be tied up and taken against her will is found dead, police suspect him the victim of one of his own provocative parlor games gone too far. Fiction soon overwhelms fact as floral tributes from across the country pile up on “Christian’s” front lawn and fans and acolytes gather in the resort town of Sag Harbor to pay tribute, to light candles and demand justice for the man who shares a name with the fictional character with who so many have become obsessed. Could it be a lover turning the tables? Could it be the work of a sociopath resentful of the message portrayed in the popular novel and movie Fifty Shades of Grey?

When the killing is linked to a second homicide, speculation of a serial-killer loose on the streets of New York City explodes, with the death of Christian Grey trending nationally on both social and in mainstream media: which could either make or break the prospects of up-and-coming media mogul Christina Blanco as she prepares to take her fledgling media company public in a billion dollar IPO.

For Christina, resisting the temptation to backslide into the hell and horrors of her past behavior is complicated by her demanding investors, an over-zealous NYPD Detective determined to declare Christina suspect number one and her confused and conflicted feelings toward Aiden Quartermaine, handsome, wealthy, heir to a vast fortune but who looks at Christina as if she’s trying to pull a con. When a blogger for Christina’s web site, using the name Anastasianne, reveals details online of the Grey killing known only to police, suspicion grows and Christina is forced either to batten the hatches or to cut and run.

With only her instinct to guide her, Christina decides on a course of action that proves fateful not only to herself but the people around her.

Features bonus previews of these other E. B. Archer novels: Finding Faith and A Reasonable Suspect

Archer welcomes all reader comments and actively encourages reader reviews of her work. Please review Archer’s novels at Amazon.com and share her work with your friends; to an artist, positive word of mouth is the best form of flattery. To receive advance notice of upcoming publications you may contact the author directly at [email protected] or visit the author’s page at Amazon Author Central or Goodreads.com.

Be the first to review “50 Shades of Crazy by E. B. Archer” Cancel reply