You are here: Products 30 Below by Wendy Stenzel Oleston 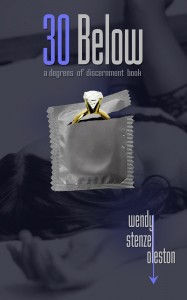 30 Below by Wendy Stenzel Oleston

Sex. Faith Quinn didn’t have much experience in that department, at least not until she met Lucas. But then again, a lot of things changed when he stepped into the picture. They fell in love the moment their eyes met and as wonderful as it felt, it also set in motion a chain of events that would ultimately change the quality of their lives forever. Honesty, trust and stress-free living become nearly impossible to find as this couple willingly steps outside God’s design for sex and marriage. This leaves them asking the question: what would things have been like had they followed the wise design of their loving Father from the beginning?

30 Below is the first in a series called “Degrees of Discernment” which follows Faith and Lucas through other life issues that cause their moral temperature to rise and fall.

Wendy is a digital designer and enjoys running. Wendy loves to travel and has been all over the world. She is a dynamic public speaker and welcomes any opportunity to share her life story with those willing to listen.

I wanted to write a book with steamy yet respectful sex between a couple. I also wanted to show the contrast between jumping into a relationship without knowing a person and taking your time to let a relationship build naturally. In addition, I wanted to bring awareness to mental illness and how people who are afflicted can live perfectly normal lives and deserve love and respect just like anyone else.