You are here: Products 29Allure by Gem Edward 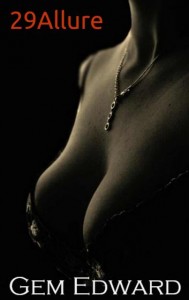 Devon James is a young and tireless professional by day, but spends her nights online behind her handle 29Allure, where ‘inner-freak’ resides. Devon believes she has mastered her dual life and all there is to the world of camming, until she is recognized by someone she admires.

See what happens when Devon can no longer hide behind her handle, and embraces her allure.

A tantalizing short, for mature audiences only

Devon’s online persona, 29Allure, had evolved into an entirely different person than that of Devon Denise James. 29Allure possessed all of the lust and seductiveness that Devon detained beneath her inhibitions.
Raised by a strict father and a cold, distant mother, she never understood the warmth of a touch or the comfort of a hug until she became an adult. Devon had been conditioned to believe that affection was for the weak, and sex was for the impious, and that she was neither of those things. She was to be strong and noble, which she took to heart – developing a strong work ethic and never quite embracing the idea of sex. Until college, that is.
Outside of her father’s strict boundaries, Devon lost her virginity at nineteen years old to two guys she had met the week before. Though one of the two had to have entered first, Devon could never remember which one got the first taste; all she knew was that her first sexual experience was a ménage à trois with two of the sexiest men on campus.
Devon’s promiscuous lifestyle was short-lived, as word of her behavior had gotten back to her father. After graduation, she had pretty much gone back into reserve, meeting Ray – someone her father adored – and attempting to settle down into a traditional lifestyle.
Everything with Ray was bliss – everything except the sex. Ray lacked the know-how to work with what he had, which made his infidelity so much more difficult for Devon to understand.
Now, it was a different story. Now Devon was in control, and 29Allure was at the wheel.

Be the first to review “29Allure by Gem Edward” Cancel reply