You are here: Products 2287 A.D. – After Destruction by Renee Van Dyke 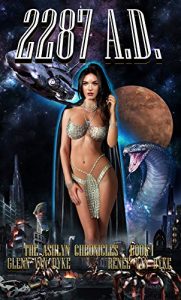 Welcome! We are a husband and wife author team that look forward to bringing you many novels in the years ahead. We hope that you enjoy the ‘The Ashlyn Chronicles’ series. The 6 books in the series are a culmination of 15 years of research into the works of Zechariah Sitchin, Carl Sagan, Richard C. Hoagland, Gerald Clark and many others. Utilizing their understanding of ancient texts, we wrote what we believe is a plausible and logical, albeit fictional story of Earth’s history and man’s creation, built around likable and memorable characters.

I wrote the book that I could never find to read! A mature, true sci-fi / fantasy.

Be the first to review “2287 A.D. – After Destruction by Renee Van Dyke” Cancel reply