You are here: Products 2 Dark Mirrors by Ryan Cole 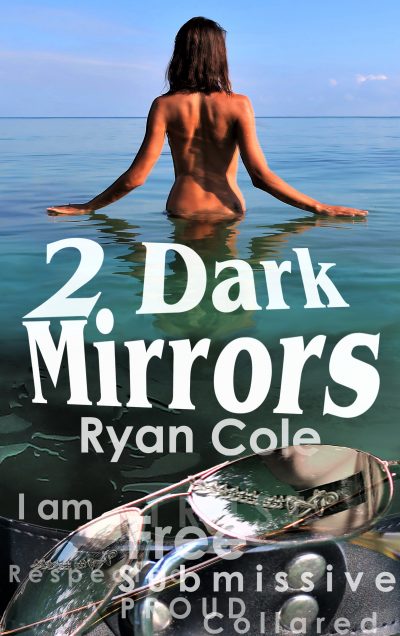 Written by a Dominant and based on his experiences, 2 Dark Mirrors is the steamy, poetic and inspiring story of a woman discovering her freedom and strength through submission to a man whose eyes she never sees.
(On Sale for 99c – Dec 27th – 29th!)

5* on Smashwords and GoodReads, it’s a must read if you’re looking for a great story and a positive insight into real Dominant / Submissive relationships.

THAT profile draws Lina in a way that seems so (wonderfully!) wrong. It’s so much darker than the others and asks for things that are too much to ask. Trying to put it out of her mind as some sort of sick fantasy, Lina carries on with her life, but it won’t let her go. It’s in her every thought, crawling into her bed at night to tease her when she’s weakest; taking hold of her hand to move her fingers beneath the sheets.

Falling into Patrick’s world of rules, discipline and mind-blowing sex, she gives herself entirely to him; doing whatever he asks no matter how afraid it might make her, or embarrassing it might be. Finding a strange sort of freedom in his control, she is changing and becoming stronger – and that’s a very good thing because she’ll need everything he’s taught her if she’s going to survive.

Ryan is a very lucky man. An experienced Dominant and world traveler, he has lived in several countries around the world and bases his writing on his experiences – like one of the characters in 2 Dark Mirrors, his pockets and backpacks are filled with snippets of paper filled with notes.

This book was inspired by the time I've spent with a few wonderful submissive women but It was reading their journals again that sparked my desire to write this book. I've not seen the morality, trust or the depth that is inherent in these relationships captured in anything I've read before .. So I decided to write…

A Few Quotes:
“Patrick smiled as he watched her, waiting before speaking. “Have you ever seen anything more beautiful?” he asked.
In the silence after, the awe she’d heard within his voice lingered in the air. Without words and without his commands, there was nothing she needed other than this. She stayed like that a long time, with her head bowed and unmoving until finally she closed her eyes, feeling utterly at peace.
…As he did, simply watching her breathe.”
—
“…somewhere in her mind the breeze becomes her light and she sees him bent over her. Basked in sunlight together, they throw golden silhouettes like some carnal and ancient art that had been etched in sandstone eons ago”.
—
“Sex is a world of opposites. The filthy acts we crave with one person are often completely repugnant with another… imagine the difference, even in a kiss.
These parts of us are not for everyone, and these desires have little to do with love.”
—
“…and as she steps lightly to the cupboard in bare feet, they barely seem to touch the floor. She appears to float, both weightless and powerful. She has become part of the air that surrounds them and the air that he breathes.”
—
“Recognizing her gift and her desire, his hand tightens and his teeth graze the offering of her neck. She wants him to bite and even to take her blood, the trust that allows her both her fantasy and her fear.”