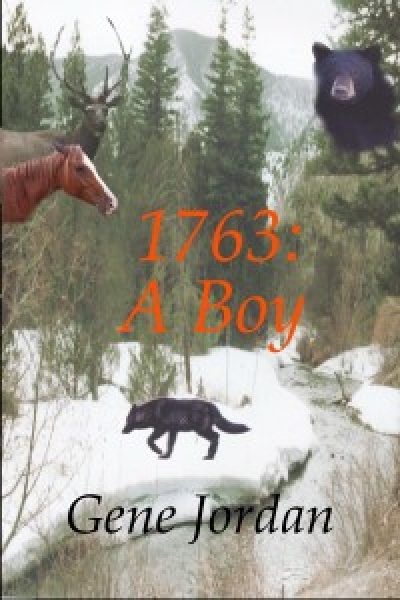 In “1763: A Boy” Jonathan Mercer rides express between the forts along the Allegheny River for Colonel Bouquet. Jonathan gets careless and finds his worst nightmare has come true. He’s been captured by the Delaware Indians, Lenni Lenape. Beaten and unable to talk he finds himself in a fight to survive. It is during this time that he meets a beautiful girl named Laura who quickly wins his heart, but in this dangerous world and time dangers lurk in the shadows. Will they ever escape? Will their love cost them everything including life itself? Can they ever be together or will their love forever be hidden in the shadows of night? Get your copy today to find out!

I am interested in Pennsylvania history particularly the Lenni Lenape, the frontier, and the Allegheny and Ohio Rivers. I wondered what would happen when a white boy of 14 assumes a man’s role on the frontier in the harsh circumstances of 1763, the French and Indian War. It’s an adventure that I would have liked to be apart of.

Book I
Hanging grotesquely by rawhide thongs tied to the ears, the head swung slowly twisting right a few turns, then in a short while untwisted to the left. There was no scalp, the eyes were gouged out, the nose and lips were cut away. Most of the teeth were either knocked out or broken from a blow to the mouth with a war club. Stuffed into this jagged opening were testicles and a penis with nearly dried blood congealing in a sinewy drop swinging from the tip.
The horse was very, very nervous, jerking his head and snuffing his fear through the boy’s hand cupping the big nostrils. It could be Indians, it could be the blood, or it could be the eerie blue light of the closing day bathing the little clearing at the west side of the Allegheny River that had frightened the big horse.
The boy had been in the saddle two days now, traveling as swiftly and lightly as possible, saddlebags strapped in a bulky pack across the withers of the big roan gelding. He liked the rawboned horse because of his 16 ½ hand height letting the boy sit high above other riders, and also because of its toughness. He could carry the boy, the mail packs, the light cavalry saddle, the new English flintlock, the powder horn, bullet pouch, a skinning knife, tomahawk, blanket, some jerked meat, and a small bag of parched corn almost effortlessly all day, usually 50 miles or so each day and still have a show of spirited wildness.
But now the horse didn’t like what he was seeing and smelling at this recently wrecked camp. The boy held him back under the shadows of the hemlocks while he studied the bits and pieces of what was a white man’s camp probably as little as an hour ago. He finally pulled the gelding to a tree and snugged the reins in a quick slip hitch, all the while patting and soothing the horse with his hands and low voice. Then, taking the slim little flintlock and checking the pan powder, he slipped from tree to rock to bush until he stood some 50 feet from the head. It was white, he could tell, but the features were so bashed and bloody he could not recognize the man. There was no body, no limbs, and the boy thought they had been thrown in the river just 100 feet away. He stood quietly for ten minutes and finally slipped up to the hanging head and cut the thongs loose. It fell with a thud and rolled over a time giving the boy a shiver with its quick view of all sides. He bent and grasped the leather ties and lifted the head and carried it back to the horse. It would not stand, rearing and jerking, rolling his eyes and baring his teeth until the boy had to put the head down. Then the horse let the boy take the blanket from behind the saddle wrapping the head in it. He tied the bundle to the conchos behind the cantle. Carefully now he guided the big red horse in a circle close to the forest so he would not leave tracks at the camp. He picked his way back to the trail going north. Sounds were muffled in the needles of the 300 year old hemlocks and it was nearly dark.
The boy rode steadily on. He was keenly alert watching for an evening light of fire that would show the Indian party’s night camp. He had been up and down this trail from the confluence of the Ohio River to Lake Erie many times in the past year and had proven to be very reliable to Ensign John Christie at Fort Presque Isle, Lieutenant Francis Gordon at Fort Venango and to Colonel Henry Bouquet Commander at Fort Pitt and of all English forces in this new Northwestern Territory. Now Captain Simeon Ecuyer commanded at Fort Pitt in the absence of Colonel Bouquet as he took care of military business at Philadelphia and Williamsburg. But Bouquet was due back at the fort any day with badly needed supplies of powder and flour.
Still, even at 14 years of age, he had seen much in his short time on the frontier, mostly spent near the fort at the junction of the three rivers and the village of Greensburg some 30 to 50 miles east of the newly built Fort Pitt. He had helped his father survey various Virginia land grants from speculators back on the James River. His father was a big, quiet man whose steady eyes and level voice made understanding and liking him easy and the boy enjoyed tramping along with the two or three man crew, dragging the chains or holding the sighting post or running back and forth in thousands of errands that filled his days.
Now though, he was alone and the hair was stiffly brittle on the back of his neck as he realized his danger.

Be the first to review “1763: A Boy by Gene Jordan” Cancel reply