You are here: No Reins by Angie Skelhorn

My name is Angie Skelhorn. I am the fifth child born into a farming family located south of Peterborough, Ontario, Canada. I groom horses part time for local owner/trainers in the Peterborough area. My day are spent surrounded by friends and family writing my next novel.

I authored On the Edge, No Reins and Till Death and Beyond – Publisher, Club Lighthouse Publishing. My newest release Severed Ties – Publisher, Damnation Books- book launch December 2012. 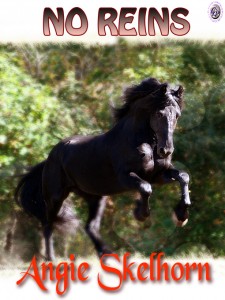 Author Angie Skelhorn introduces you to the world of harness racing and the passion, courage and most of all the struggles of first love…

No Reins is my second young adult book. Love at first sight shakes Angel to her core. No doubt her love is real she up and leaves her security for life at a harness-racing track. Tensions begin to rise in her new environment. Even though she is devoted to Stephen her insecurities creep in. She finds herself going in a new direction. A direction that wasn’t her. She experiences a lot of dips and dives as she tries to sustain her sanity.

The times she feels pain, fear, frustration and anger Stephen comes through for her in a very big way.

Author Bio:
My name is Angie Skelhorn. I am the fifth child born into a farming family located south of Peterborough, Ontario, Canada. I groom horses part time for local owner/trainers in the Peterborough area. My day are spent surrounded by friends and family writing my next novel.

I authored On the Edge, No Reins and Till Death and Beyond – Publisher, Club Lighthouse Publishing. My newest release Severed Ties – Publisher, Damnation Books- book launch December 2012.

What Inspired You to Write Your Book?
There is nothing better on a summer’s night than the sound of horse’s hooves as they hit the track surface, the wings fold, and then horses race.

I became involved with harness racing through my father’s side of the family. My grandfather could be found at the mutuals making his bet. My father and brothers owned and trained standardbred horses. They have been active in standardbred racing business their entire lives.

I began grooming horses at fourteen years old when I found employment at Greenwood Raceway a horse racing facility in Toronto. Then it was off to work in the Ottawa area when I was fifteen.

When I left home I was too young to be afraid. I wanted some fun and I really liked getting to work with horses. Living on the track grounds in the past I faced a few challenges. My youth living on the horse track was memorable. My experiences with the harness world as a young adult is the more fictional than fact romance story No Reins.

Read more, including a sample from the book
Sample from Book:
Chapter One

“ANGEL, TURN OFF THE television and go to bed. You have school in the morning,” her mother called from the kitchen.

“Okay…okay.” she yelled from the den. She scrambled to her feet from the couch.

In front of the picture window she stopped. An immense glow from the headlight beams came up the laneway. The pickup truck and trailer parked. The headlights shut down. Both the driver and passenger doors opened and then slammed shut. Minutes passed when the front door swung open.

Angel approached the dining area. She stood in the archway between the two rustic rooms dimly lit from the corner table lamps. Her mother wrapped her arms around her son, hugging him close. She cupped his face in her pudgy hands, her eyebrows arched.

“You look tired, Tim. You’ve aged beyond your nineteen years. Stay and get some sleep,” she said.

Tim pulled away from his mother’s grip. “I’m fine. I can’t stay. The horses in the trailer need to be in Sudbury for the stake races tomorrow. The animals need to rest from the long drive,” he said, walking toward the kitchen.

He opened the fridge and removed two cans of pop. “Mom, this is Stephen. He’s stabled beside me at the track,” he said, returning to the dining area. “His parents own a flower shop.”

A man the same age as her son and well-built, stepped from the foyer. He handed Angel’s mother a bouquet of blooming white roses.

“They’re beautiful, thank you,” she gasped, smelling the petals.

“You’re welcome,” he said with a strong French accent.

ANGEL DIDN’T MOVE. SHE listened to his syllables roll over his tongue completely enchanted by him, wearing his worn, black leather jacket, rich blue sweat shirt and boot-cut jeans. Weak in the knees, her eyes covered every detail; his curly dark hair, bright blue eyes that sparkled, and dark tan. All the little parts that made up the whole.

“Hey, little sister, how’s things?” Tim asked. Stephen turned and looked at her, running his hands over his black curls, and smiled.

“Good,” she managed to say, feeling a surge of warmth rise in her cheeks.

“When will you come home again, son?” his mother asked, setting the bouquet on the dining table.

“I don’t know, mom, but I will call.” Tom kissed his mother on the cheek. He walked to the front door, turned the knob and left. Stephen followed. He hesitated for a moment in the entryway, glanced at Angel and smiled, but didn’t say anything.

She stared back as he closed the door behind him.

Her mother walked across the hardwood floor toward her and entered the den. Angel joined her at the window and looked out. Beneath a bright, full moon, Tim climbed into the driver’s seat while Stephen sat on the passenger’s side of the pick-up truck. Both shut their doors.

Tim slid the vehicle into gear, curved the truck and trailer around the circled driveway and crawled down the gravel lane. The headlight beams faded into the dark night as the vehicle drove away.

Angel walked to the dining area and plucked a white rose from the bouquet resting on the table. She ran up the stairs and into her bedroom. She fell into bed and sniffed the flower’s wonderful scent wondering if Stephen, too, experienced the same spark as she did. She didn’t know how their paths would cross again, or when, only their paths would.

1 thought on “No Reins by Angie Skelhorn”